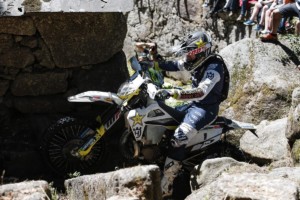 Graham Jarvis has led home the Rockstar Energy Husqvarna Factory Racing team at the opening round of the World Enduro Super Series in Portugal with a strong fourth place result. With the notoriously challenging Hard Enduro event marking the start of the 2019 WESS season, Jarvis narrowly missed out on a podium result, placing just eight seconds behind the third placed rider after four hours of challenging racing.

As a three-time winner of Extreme XL Lagares, Graham Jarvis entered the three-day event in confident spirits. In a race where experience counts, the Husqvarna TE 300i rider put in considered and steady performances during Friday and Saturday’s qualifying action, saving himself for Sunday’s main event.

Faced with a long two-lap race, Jarvis quietly worked his way up the leaderboard on lap one to position himself for an attack on the podium on lap two. Gaining ground on the early leaders, he worked his way up to second midway around the lap. Frustratingly, a couple of small errors cost him some valuable time, eventually finishing fourth and less than 10 seconds shy of a top three result.

Back to competitive action following a serious leg injury sustained last November, Bolt was keen to gain quality race time. But as the defending WESS champion and winner of the event in 2018, he also wanted to deliver his best.

Placing third in Saturday’s City Prologue in Porto showed he was determined to secure a strong result in Sunday’s main race. Starting well, he comfortably held the pace of the top five during lap one. But as fatigued set in during the latter half of lap two he was unable to make a challenge for the podium yet held on to claim a well-deserved fifth.

Also a three-time winner of the race, Alfredo Gomez was eager to make it a fourth victory in Portugal. Winning the Prologue, the Spaniard set himself up as the fastest seeded rider for Sunday’s Hard Enduro. Setting off first, Gomez was unable to settle into the rhythm of the race and was quickly caught by the chasing pack. Despite trying all he could to up his pace, he ended his day in seventh.

The World Enduro Super Series continues with round two, Trefle Lozerien AMV, on May 17-19.

Graham Jarvis: “I’m really happy with how things went today, especially as I haven’t really been on the bike for the past two weeks due to some niggling little injuries. I was feeling a bit tense on the first lap but loosened up on the second and was able to up my pace a little. The bike felt great today and I was really able to attack the gnarly stuff – some of it I was able to get up in one go. The course was as challenging as ever – there was even a new gully for this year that was about half a mile long. I had fun though and it feels good to get a top result, even if I did just miss out on the podium. I’m looking forward to my next race now and hopefully I can get a similar result, or better.”

Billy Bolt: “I’m so happy with my result, it’s been a long three days, but I got to the finish. I didn’t really have a plan coming into today’s race, I just wanted to try and stick with the other guys for as long as I could. My pace on the first lap was good, I just didn’t quite have the energy to keep up when we got back into the technical stuff on the second lap. I gritted my teeth and kept going, but it was quite a lonely second lap to be honest. I’m over the moon with the result – it feels like a win. Six weeks ago, it didn’t look like I would be ready to ride here after my injury, so to be able to finish with such a strong result feels amazing.”

Alfredo Gomez: “It was very tricky out there, one of the toughest day’s riding I have had for a long time. It was so slippery, and I had quite a few crashes. I set off first and unfortunately lost sometime early on when I made a mistake. I think three riders passed me and then we got into the first river and I struggled to stay with them. It’s a shame because yesterday my pace was so good and to come away with the Prologue win felt great. Today I just couldn’t get comfortable with things. We have a week until the next race so I will try to recover as best as I can and get prepared for France.”